On , came to the Barnes and Noble at The Grove in for her book signing.  Her two books, Sugar and Spice (from her L.A. Candy series) and Style, came out in LA on October 5.

Being that LC is one of my favorite celebrities and my favorite reality TV star, I had to go to the signing.  It started at , but you had to be in line by .  Even then, the line wrapped all the way around the corner.  Both guys and girls were waiting impatiently but excitedly to meet the famous LC.

In order to attend the signing, you had to buy one of her books at the Barnes and Noble at The Grove.  They started selling the books with the wristband for that night at  So no wristband, no LC.  Each wristband had a letter on it, defining where you stood in line. 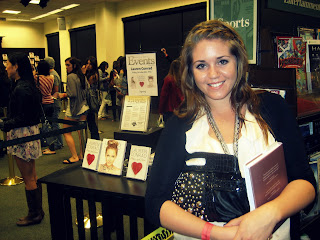 Once you bought the book, the cashier would give you a paper describing what would happen at the signing, along with the rules.  One of the rules was “no posed photography allowed.”  Seeing this, people who had been in line for hours left because they did not think it was worth meeting if they did not have the chance to take a picture with her.  But I did.

The whole time that I was waiting in line, I was thinking about what I should say to her or ask her.  Once I got to the front of the line, and walked up to the table, I was so excited.  She greeted me saying, “Hi! How are you?” very friendly. 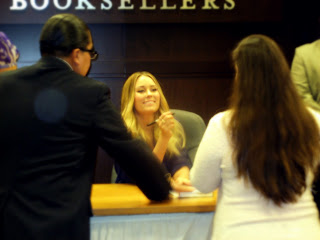 I asked her, “Do you have any quick suggestions for preparing for FIDM [the Fashion Institute of Design and Merchandising]?”

She replied, “The career center at FIDM is incredible.  They have so many internship opportunities there, so you should definitely check that out.”

Once that conversation was over, I said “thank you,” and she smiled back.

But meeting was not the only thing I did that night.  I also bought my Homecoming jewelry!  🙂  But that’s for another time…

Red Hot + How to Feel Confident

God is Greater than the Highs and Lows