Notice: WP_Scripts::localize was called incorrectly. The $l10n parameter must be an array. To pass arbitrary data to scripts, use the wp_add_inline_script() function instead. Please see Debugging in WordPress for more information. (This message was added in version 5.7.0.) in /var/www/wp-includes/functions.php on line 5313
 Wedding Wednesday: How He Asked - wander abode
Wedding
/

Wedding Wednesday: How He Asked 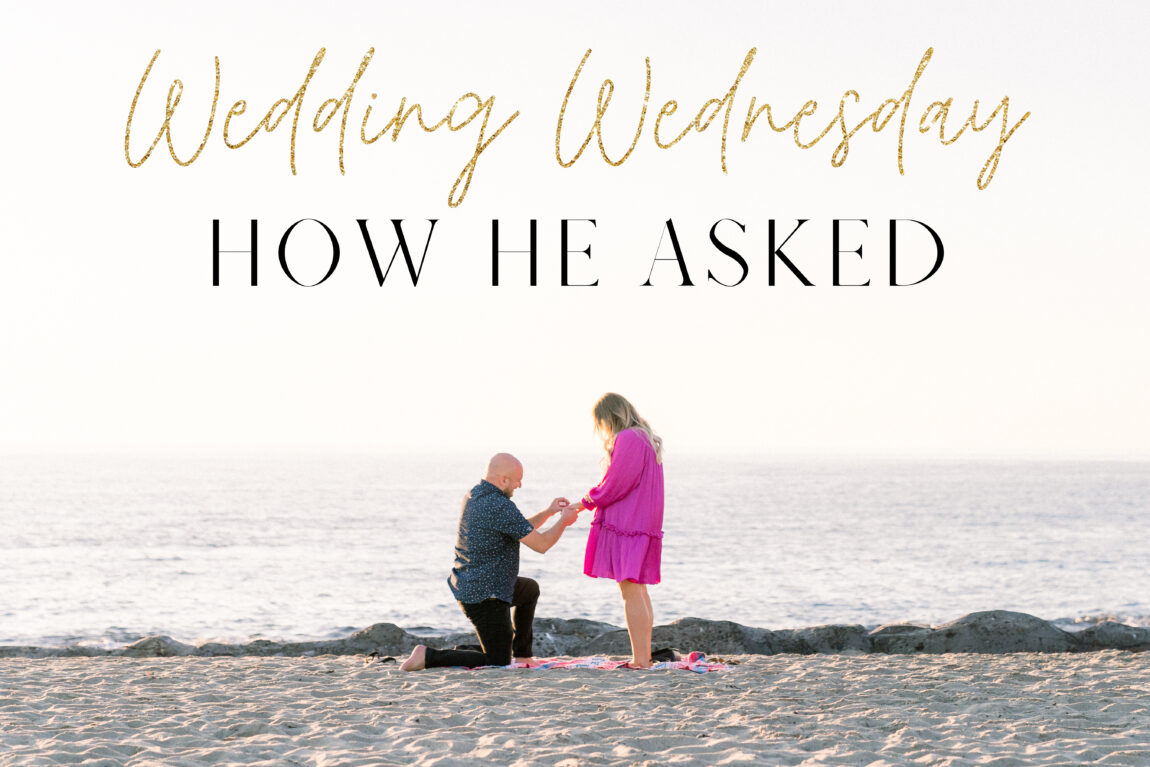 OMG YOU GUYS!!! Colton and I are engaged!!! I’ve been anticipating this for MONTHS. Actually, over a year, haha! If things went according to our plans and what we wanted, we would’ve been married for months already. But God had different plans, and I trust that everything is working out according to His plan. Today I’m going to share mine and Colton’s story–how we met, and how he asked me to marry him! Sorry in advance if any of it sounds sappy or cheesy, that’s just me haha!

I had tried online dating for quite a few years and in 2018 had given up… or so I thought. One day, I randomly opened up Bumble, and the first guy to pop up was Colton. He was a worship leader at a nearby church, had great style, and from what I could tell from his bio & smile, seemed like a really great guy. So… I swiped right! Although we matched right away, I put off sending him a message (girls have to message first on Bumble) for a few days. I finally messaged Colton and we only chatted back and forth a few times before he asked me if I’d want to meet up in person. Again, I put off messaging him back for a few days because honestly, I was scared of putting myself out there and once again getting hurt. But after chatting with my girlfriends a few times, they convinced me to just go for it! Our first date was a couple hours at a local coffee shop and included some pretty deep conversations. We seemed to connect right off the bat, and Colton didn’t waste any time and asked me if I’d want to go out again before we parted ways for the day! Obviously, I said yes 🙂

Btw, I later on found out that Colton paid an extra couple dollars to “super like” me on Bumble so that he’d show up first in Bumble! Who knows if I’d be sharing this story now if he hadn’t done that.

From Katie’s point of view

Our 2 year anniversary was on October 29, 2020, and just like every other special occasion (i.e. anniversary, Valentine’s Day, birthday), we had plans to go to our favorite restaurant, Habana, at Irvine Spectrum. About a week or two before, Colton mentioned that we should go watch the sunset before going to dinner on our anniversary. Immediately I thought, “maybe he’ll propose that night!” Another time we somehow started talking about my nails and he asked how long they last when I paint them, and I said around 5 days, so he told me to paint my nails every 5 days. I think there were a couple more things leading up that he said that made me think it was going to happen on our anniversary, but I can’t remember.

And then. On the afternoon of our anniversary when Colton was on his way home from work, he called me and asked if I had a cute blanket that I like that we could bring to the beach to sit on. And that’s when the extreme butterflies kicked in! I was then 90% sure it was happening later that evening.

When I got to his house later, he was all smiles and had a bouquet of red roses waiting for me–so sweet! He didn’t seem nervous at all, just really happy!

Fast forward about an hour later… we just arrived at the Montage Resort in Laguna Beach, and were walking down the pathway to Treasure Island beach. We sat down and were talking and watching the sunset for a little bit, and here and there he said “I love you so much,” “you’re my best friend,” “it’s been so fun the last couple months making plans and talking about our future.” Then he did a big stretch, said he needed to stand up, and asked me to stand up too. He bent over and grabbed the ring box from his jacket, got down on one knee, and said “WILL YOU MARRY ME?” 😭💗 And then the tears started haha I didn’t even look at the ring, I just started crying and gave him the biggest hug. Even though I had a pretty good idea it was happening that night, I was so excited, overjoyed, relieved, but also thinking, “IS THIS ACTUALLY HAPPENING RIGHT NOW?!?”

This was one of the days I’ve been looking forward to my whole life and it was perfect. The perfect day, the perfect setting, and most importantly, the perfect man for me. Even though I had a pretty good idea it was happening, it was still amazing. Plus, I knew to have my nails done and buy/wear the right dress 😉

Below are the beautiful photos that my wonderful friend Kimberly took, and I even included the ones from right when it was happening when I was crying and not ready for photos 😂 Colton planned a week and a half in advance with her to set this up! Good job, guys 👍🏼

From Colton’s point of view

Over the last couple of years I think we both had a lot of expectations as to what a proposal would entail. The ring was the easy part, but the proposal would be a lot up to me. I often asked her what she wanted so I had a pretty good idea. I did for a while float the idea in my head that a Mariachi band would magically show up but thought that might ruin the moment. 😉 Unfortunately due to Covid I had to keep it pretty simple but I think it ended up being the best thing in the end. I called up Katie’s friend Kim who is a photographer, which surprisingly was the part of all this I was most nervous about. Why? Now it was real and in motion. It was finally gonna happen.

We talked about all the details and then met up and planned it out. Details like where would I stand, where would she stand, etc. She did a great job and we felt like we had a good plan.

The next Thursday I took Katie to one of our favorite places to watch the sunset in Laguna that we have been to several times. We walked down the hill as my heart was racing. Definitely a small case of the butterflies. After we sat in the spot Kim and I mapped out we talked for a bit about life and the future as we watched the sun go down. I told her how much I loved her and how grateful I was for how God brought us together. When I was ready and after making sure no one was walking behind us as not to ruin the pictures, I stood up pretending I needed to stretch my legs. Although they did need a bit of a stretch haha. I told her to stand up and got down on one knee, and asked her if she would marry me. The jury is still out if she said yes because I think we both blacked out. I just put the ring on her finger anyways haha. I knew what the answer was. We took the pictures with Kim and headed off to dinner. One of my favorite moments though was getting to see her FaceTime her friends and surprising them with the news. It brought me a lot of joy to see how happy she was. I think both of our faces were broken that night from how much we were smiling.

I’m SO excited to share our engagement season with you all! Get ready for lots of wedding planning inspo! I’m planning on doing a “Wedding Wednesday” series on the blog, so keep an eye out for that!

And THANK YOU Kimberly Hope Photography for capturing the most special night of our lives thus far!